3 reasons why I love when men leave the toilet seat up. 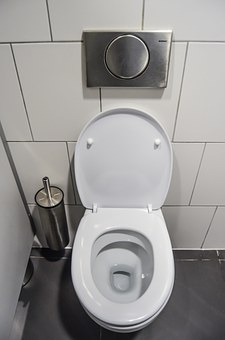 I hate using public bathrooms but sometimes I have to do it. And you gotta do what you gotta do.

I grew up in a pretty big family. 2 men, male foster kids all around, two brothers, three sisters, one woman. So my family was quite big and the boys never put the seat down in the bathroom.

Personally, when I walk into a public bathroom,  worrying about whether the seat is up or down is the last thing on my mind. The first thing I do is examine the door knob before walking inside. Is it clean, nasty, or sticky? Then I briefly check my surroundings to make sure there are no creepy people watching me. I walk toward the stall and check out whether there is toilet paper or not. Then, I move toward the toilet to see what is inside. If there is anything floating in it, I gasp, and slowly moonwalk toward the confined space that I have placed myself in. I find the door, pull or push (depending on how shocked I am) and I go to find another stall that is cleaner.

This behavior was not that different at home. In a home full of boys and men, I used the same strategy before stepping into a potentially grave situation. The last thing on my mind was whether the toilet seat was down. In fact, I was happy it was up and here is why:

When men leave the toilet seat up they are actually doing 3 things for us women/ladies/girls.

I think it is not fair that men have to put the toilet seat down in anticipation of a woman using the bathroom. What if another man wants to use the bathroom? Having the seat up saves them time and energy, and muscle strength. They are being polite to their own kind too. They are actually being less sexist.

Aren’t we searching for equality here?

I know for a fact there is no way I’m going to take the time to put the toilet seat up for the next penis holder. I just don’t have time for that. And yet, women are not reprimanded for not doing this.

Only men are. They are called slobs and pigs, and dirty, and rude, and gross, and macho. The list goes on and on. And yet, when they walk into a public bathroom, or their own bathroom, seldom do they see the seat up welcoming them to this wonderful urinating experience.